Menu
There has been an error processing your request

There has been an error processing your request

Exception printing is disabled by default for security reasons. 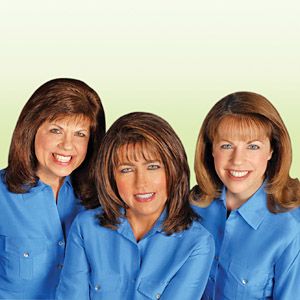 Linda Micheff Johnson is the host of a children's program on 3ABN  called Tiny Tots for Jesus. She enjoys singing with her sisters, and together they have recorded four gospel CDs as well as a music video entitledWalking With Jesus. She leads out in prayer ministries and is an inspiring speaker at churches, seminars, and women's retreats around the world. She enjoys nature walks, spending time with friends, and helping others. Linda is the girls' dean at Great Lakes Adventist Academy in Cedar Lake, Michigan. She is married and has one son and two grandchildren.

Brenda Walsh is the producer and host of a daily children’s program on 3ABN called Kids’Time. She is an author, speaker, singer, registered nurse, and artist, and has authored several vegetarian cookbooks with her sisters, Linda and Cinda of the Micheff Sisters. Brenda is married to Tim, has two daughters, Rebecca and Linda Kay, and two grandsons, Michael and Jason.

Cinda Micheff Sanner is the producer and co-host of the popular children's program on 3ABN called Tiny Tots for Jesus. She is frequently on the 3ABN Today program with her sisters, demonstrating vegan vegetarian cooking. Together they have authored five other vegan vegetarian cookbooks. She is involved in women's ministries and travels around the world, giving cooking demonstrations and conducting seminars on the Art of Christian Hospitality, Becoming the Person God Wants You to Be, and Learning to Love. Cinda is a nurse, interior decorator, and photographer. She is married and has one son and one daughter.